On Saturday we set off with our giant Bretton banners: What Was and What Could Be.

What Could Be: blank and ready for ideas!

Everyone who joined us for the walk was given two luggage tags – one on which to write a memory (What Was) and on the other: an idea for change (What Could Be). And as for any unsuspected people we intercepted on the walk… we asked for them to add theirs too!

Here are some of the things that came up whilst we walked….

We discussed the idea that the main square could have more an Italian piazza feel, which would see people eating and drinking outside. It could become a space known for community events and activity:  The ‘Piazza Pyramid’!

It was observed that the current 2-seat red benches, whilst characterful in design, do not currently accommodate for this kind of social activity.

The Oxcart pub, located in this main square, is clearly a very important venue to much of the neighbourhood and site of many found memories. One person however added that they felt it could try and become more of a family-friendly venue. We wondered if the pub would be interested in playing host to a quiz or bingo event one day?

We had suggestions for Polish shops and restaurants closer to the centre of North Bretton. It was felt it would indeed be nice if there was more of a diverse range of cuisines on offer!

Moving away from the square and into the park, we found that everyone we met instantly spoke about how much they appreciated Bretton Park.

People suggested the idea of having outdoor community exercise classes in the summer, in a bid to make greater use of the space, and others reminisced about the days of weekly cricket matches out on the fields and suggested bringing this back.

People fondly remembered when Bretton Park had a paddling pool, although everyone noted that the broken glass bottles often found at the bottom of the pool was something they didn’t miss. The suggestion was put forward that this site – now paved over – could be re-purposed as a community garden.

Today however people really value the water park and it was discussed with excitement that the water fountain is due to be switched on next week.

Elsewhere in the park a request for a sprucing up of the skate-park was put forward, and the need for more benches was a frequent suggestion. People clearly care a lot about the animals and plants: the urban squirrels also have a place in many a peoples hearts and the need to take greater care for our bees and birds was highlighted by a few. We talked about how we can make small changes to help out the environment – by switching from using ladybirds instead of (toxic) pesticides to get rid of aphids, for instance.

The age-old complaint of litter came up from time to time, although it was felt that things had improved somewhat, following the Parish Council’s decision to hire two dedicated litter pickers. We talked about how it would be nice if the whole community helped out with the effort, picking up the odd item they find on the floor.

Interestingly the issue of social media cropped up on several occasions throughout the walk.  Many felt that whilst  social media and digital tech can be very empowering (when used in moderation) our increasing use of and reliance on it is sometimes getting in the way of building real-life relationships within our own physical community. We spoke about the need for more physical spaces in the community for meeting and chatting (so that this activity is not so confined to the digital realm)…which we think supports the Pyramid Piazza suggestion…

People especially expressed the need to have more events for young adults in Bretton. It was felt that they are often a group that are somewhat neglected. We wondered what kinds of activities this group might want? Is the outdoor gym well used by this age range? 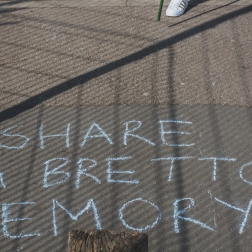 A memory was shared from when you used to be able to hire tools from Crofts corner – such as nails, hammers and saws to build your own dens. We thought this was lovely, although a health and safety nightmare in today’s society! A tool-sharing platform in some form would however be a great asset in Bretton.

Finally the lack of effective signposts for the assets in North Bretton was raised and it was felt that many members of the community might not know about all that the area already has to offer. This included the physical assets such as the skate park, BMX tracks, Crofts Corner, the Pyramid Centre and also the social offer including weekly groups, classes, training opportunities and more….

Following the walk we set up a table at the Bretton Fun Day co-organised by the Parish Council. Here we were asking people to paint, draw or embroider a memory or idea for North Bretton which could be added onto the Banners.

We would love to collect more memories, ideas (on tags and fabric patched), please do get in touch if you have something you’d like to share!

Note: In preparation for the walk the Bretton Greens team were out and about collecting memories from local residents. Read more here and here.

One thought on “Share a memory & an idea for North Bretton”